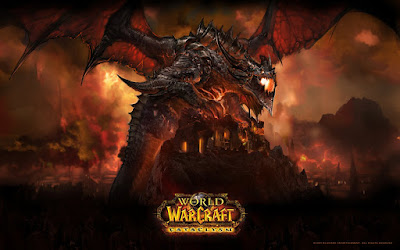 * Level cap will be 85 because developers wanted to focus on the right things: redoing Azeroth and providing more end-game content.
* A new guild advancement system will let you earn guild perks and level a guild through 20 levels with points to spend in a talent tree. You will access abilities such as cheaper repairs, less durability loss on wipes, or mass resurection.
* Phasing can now add and remove terrain based on your progress. Coasts will be progressively more flooded depending on how far you are in a storyline for example.


Path of the Titans

* Talent trees won't be extended, you will just get 5 more talent points.
* The Path of the Titans will let players follow a path (not restricted to classes), this is a new talent system with new skills and passive abilities.
* A mastery system is being added as well, a lot of talents will be reworked to be more fun. The point is to get rid of a lot of the talent skills and not make you spend all your points in a talent tree just because it gives you more damage or higher crit chance.

* Archeology is a new secondary profession, not many details about this one but we'll probably hear more about it in future panels.

* Deathwing, the leader of the Black Dragonflight will be the main vilain of the expansion.
* Deathwing heard the whispers of the Old Gods after the arrival of the Burning Legion, he eventually grew very powerful and also became very very crazy.
* His plan was to catch the Alliance and Horde unaware with something so massive that it would bring up the Elemental Planes.
* The Elemental Planes were created by titans to contain the elementals, they weren't happy with this decision and some of them like Ragnaros got really angry.

* Other races were discussed for the alliance, but the developers really felt that the alliance needed a monstrous race and horde needed something fun and tiny.
* Genn Greymane closed the Greymane Wall to block the Scourge's plague. Gilneas got nervous as the Scourge progressed to the south.
* Arugal was a patriot, he called the Worgens to battle for Gilneas but eventually was surprised by how dangerous what he called down was.
* Worgens are from somewhere else ... or even someWHEN else. They have a wolverine temperament and spent a lot of time trying to contain the beast within.
* One of the Worgen racial will be Dark Flight, a short duration sprint

* Goblins are a technological race from Kezan, their society is broken up into trade cartels run by trade princes. They are new factions and not the ones you can already see in game.
* The Cataclysm hit Kezan really hard and it's possibly destroyed. The goblins are now refugees on the Lost Isles.
* As a goblin you start as a neutral cartel and eventually join the horde as you progress through the questlines.
* Racial - Rocket Belt will have multiple functionnalities, you can use it to launch yourself forward or launch rockets at targets.

* Azeroth is now flyable. Pretty much all the zones will be changed to some extent, some of them like Elwynn Forest won't change too much but others like The Barrens will be sundered in two by Deathwing.
* The Wailing Caverns are now a lush and verdant Area.
* Desolace now has a lot more waters and a lot of plants can be seen in the screenshots.
* The Horde finally conquered Southshore.
* Auberdine was destroyed and the night elves have set up a new camp north of it. Garrosh wants to expand the horde and has built a fortified camp at the south of the zone.
* Stonetalon has been cleaned by the Goblins, Azshara will be the new Goblin zone, and are using quarries in the mountains of Azshara to build their town.
* We all left a little part of ourselves in Northrend and the old world will be much darker than it was to make heroism and brotherhood more meaningful like Warcraft should be.
* Every zones will be revamped with new quests, items, and art. The old world will be a brand new experience and you won't have to deal with the annoying agility/spirit quest rewards anymore.
* 7 new zones will be added : Twilight Highlands, Mount Hyjal, Deepholm, Uldum, Gilneas, The Lost Isles, Sunken City of Vash'jir.
* The Worgens and Goblins starting zone level goes from 1 to 15.
* Sunken City of Vashj'ir will be an underwater zone and was the home city of Lady Vashj before the original sundering, this is a gateway to the Abyssal Maw. Going through the Abyssal Maw will take you to the Elemental Plane of Water, even if the zone will be underwater you will be walking on the sea floor here, new underwater mounts will be available and should have the same speed as normal flying mounts.
* Deepholm will be the new hub of the expansion, you will have portals here to let you teleport to Hyjal, Uldum, etc ... The Twilight's Hammer now serves Deathwing and have brought him back to full health in the Temple of Earth at the center of the map.
* Uldum will have at least two dungeons and is heavily inspired from Egypt. The sea at the west of Tanaris was just an illusion created by the Titan and Uldum is actually a brand new zone. It is rumored to hold a super weapon. Uldum is also the home of the Tolvir, a race of stone-like cats created by the titans.
* Ragnaros used the cataclysm to come back from the Plane of Fire where we sent him and is now sieging the World Tree in Mount Hyjal to burn it down. Malfurion is back from the Emerald Dream. The whole zone (Hyjal) will make extensive use of phasing.
* Twilight Highlands will feature Grim Batol,
* Apparently Orgrimmar will be rebuilt and reinforced with steel, it now looks a lot like Garrosh strongholds...
* Undercity has been redesigned to be flyable, it now looks much more impressive from the outside.
Deepholm isn't really connected to Azeroth, the connection is where Deathwing emerged from the ground.
* The Twilight Highlands will feature Grim Batol, Deathwing literally broke open Grim Batol as he emerged from the ground. This is the new Twilight's Hammer base in Azeroth and both Horde and Alliance will have a new port town with boats here. The Red Dragonflight is still here but has been pushed back to the west of the zone near the Wetlands.

* The Firelands will be a new raid dungeon, it will let you go to the Elemental Plane of fire and visit Sulfuron's Keep, Ragnaros will be here and he's really pissed.
* Uldum will feature two new dungeons, the Lost City of Tol'vir and the Halls of Origination (a titan city)
* Grim Batol will have a level-up dungeon and a raid instance.
* Skywall (Air Elemental Plane) will have a level-up dungeon and a raid instance.
* The Deadmines and Shadowfang Keep will be back in a brand new level 85 heroic version.
* Blackrock Caverns will be a new level-up dungeon located in Blackrock Spire. This is an entirely new dungeon, new art, new creatures, new everything.

* Battle of Gilneas will be a new battleground where the objective is to control the city by controlling as many districts as possible.
* Tol'barad will be a new PvP zone and will also be the most important daily quest hub. Just like Wintergrasp a battle will happen every few hours and the winning side will get access to the Tol'barad Prison and extra daily quests, the really profitable ones.
* Rated battlegrounds will be added to the game and should get you the same rewards as Arenas.
* New arena maps will be added.
Posted by cwew at 5:33 PM