But I really don't have anything to say. Only, that in college, ive stopped playing WoW and am playing TF2. That's it.
Posted by cwew at 12:54 AM 2 comments:

So, a lot has happened recently in teh gaming industry. Will Wright finally released his new pet project, SPORE, this past weekend. The game has been getting tons of positive feedback, allowing the user to personally tailor a universe. Starting from the cell stage, much like a point-and-click game, to the create stage, more like an rpg, to the tribal and then civilization stages, dumb downed rts's, to the space stage. Space is a combination of all of these and more. A world pissing you off - bomb its inhabitants, use a laser on the buildings. They launching interstellar warefare against you - sign their death contract with a simple click releasing the planetary bomb that explodes their entire planet. (I have yet to unlock this tool but I imagine it's amazing.) All-in-all, SPORE is a revolutionary game that will be the talk of the town for quite sometime.

On a different note, Blizzard Entertainment gave an official release date for Nov. 13th of this year, claimed to be "invading a store near you." I'm sure I am not the only one shocked to find out that Blizzard is on top of things, not pushing back the release date an entire year as was done with the previous expansion. Wrath of the Lich King is set to deliver an even bigger overhaul to the UI and gameplay then before, complete with a new hero class, the Death Knight, bringing more of the old Warcraft Lore, as well as the Inscription profession that augments the abilities of players in certain situations, and finally the increased level cap to 80 and the Northrend area to do it in. Many other additions have yet to be revealed, but the game is expected to have no real effect on the market. One critic was quoted saying that the game will "simply keep current players in the game, and those who would just begin the game out because of the gap between leveling and gameplay."

Things still on the horizon are the much anticipated FallOut 3, and Fable 2. I will be purchasing these games and recommend them to any person seeking intense rpg action, intriguing, depthful story lines, and creative ingenuity. I also recommend a trial of Mythic Entertainment's, those who brought you Dark Age of Camelot, Warhammer Online (referred to as WAR). Having participated in the Beta versions of the game, it leaves much to be expected. Whether due to WoW's near monopoly on MMORPG gameplay and creativeness or expectations, who knows. The game features a multitude of classes, in-depth storylines and quests, as well as something WoW has only recently thought of, siege-warfare. While WoW has their battlegrounds, WAR has full on castle assaults and siege equipment usage. WoW will be releasing these additions in Wrath of the Lich King, and some suspect WAR took this idea from them.

To conclude, it should be a very interesting Q4 for video games. 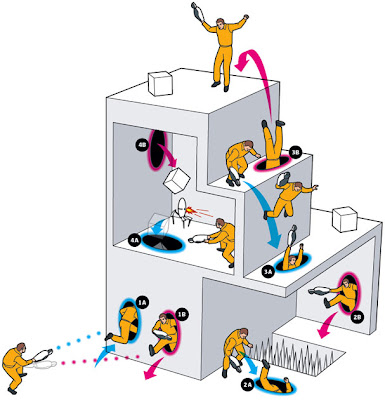 Could this possibly ever be a good idea? It seems very unlikely that they could ever make a complete gaming experience as tight and compelling as the original. I only ask because I saw something about Gordon Freeman earlier today on some gaming sight, and I thought it said something about him at Aperture Science. I was wrong about that, though.

So I bought the World of Warcraft soundtrack. And now I've been
listening to it when i play WoW. Sorta defeats the purpose right?
Also, the past two nights I have been up really late playing WoW, this
past night being up untill 5 30am. That is the point when it stops
being late and starts being early. I did not know a game could hold my
interest for so long and so intensely. And now I started a warlock
that i have to level. O man.
Posted by cwew at 6:16 PM 3 comments:

Working at the library tonight

Though I did read a very interesting book about Ayn Rand, Objectivism, Atheism and Rationalism.