On the eve of the arrival of my computer, I have been playing Guitar Hero 3. It is different from Guitar Hero 2 is about graphics. I think there is some difference if hammer ons and pull offs, but I really don't know All I know is that I am good on it. And Raining Blood by Slayer is just unfair. I will have a larger post either tomorrow or the day after detailing my computer and everything.

I have been playing TF2 quite a lot. That game is a lot of fun and I love that the Achievements don't mean anything. Thats how I am playing all games from now on: for fun and not achievements.
Playlist:

Ok, well, taking a break from Java programming, I'm here blogging. Here are some things that are important to video games:
Playlist:

With the purchase of the Orange box, I have only really been playing 1 game, Team Fortress 2. The game is so much fun and demands so much strategy. I am a terrific medic and a adept enigineer. I have realized the best way to build a sentry is by contructing a dispenser first, so you can have a infinite amount of metal flowing in. As a medic, I am often the only one being a medic. I have gotten the team doctor award already and am very good at not dying. Nail gun is good at close range, though don't expect to charge in and take out a heavy, which I did incidentaly. I do dislike that most people on my team are always spies, snipers or scouts. You need some firepower to win matches, not just speed and stealth.
I have not had a chance to play Portal yet, though I hear it is a terrific game. I do not have a cross-country meet this weekend, so I expect to either have a fun night out and a fun night in. Fun night out, probably Saturday, since Logan is gone on Fridays to Magic. I have not played a lot of counter strike, but I have been playing some Garry's mod and supreme commander. I am getting good with all races, though they really all play the same. I hope the SupCom expansion changes that some.
Playlist 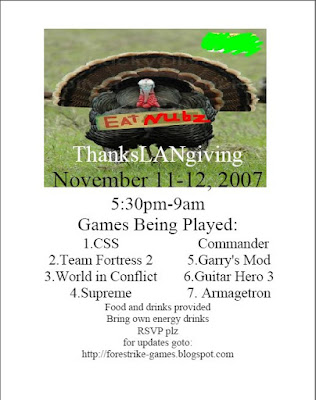 Due to recent, unsuccessful lan parties, i am going to throw out some
ideas for a good one: 1 have it planned in advanced. Make sure
everyone can come. 2 have everyone rsvp 3 have a list of planned
games
Posted by cwew at 9:32 AM No comments:

Halo 3 and games to come

Yes, Halo 3 is pretty much taking up all of my time. I am playing it non-stop. Yet, for some reason, it is boring right now. I attribute that to the lack of people to play WITH. I think playing with friends makes the game so much more enjoyable and hope that it is the case. Its either that, or its because that is all I have been playing all day. I am leaning towards the latter.

I was thinking recently, and this is going to be a fantastic holiday season, for two reasons:
1. Great Games
2. I have money
I really think that one of primary factors of why many kids don't play MORE video games, is because of money issues. Which, is ok, because once the kids have money, they are obviously working hard enough to play less, because they are busy making the money.