I've had quite a time with Team Fortress 2. Admittedly, I was not even going to buy this game. The Orange Box really did not get me very excited upon it's release about a year ago. However, like most Valve games, word of mouth got to me and I bought The Orange Box. Now I buy all Valve games before they even come out. I now have complete confidence in the team at Valve.

This isn't a review of the Orange Box, though. I have not even finished Half Life 2. I really should. Anyway, I am here to review its multiplayer component: Team Fortress 2. The game came out a year ago and consequently, every game critic has reviewed it to their heart’s desire. So what do I have to say that’s any different?

Time is that answer, I believe. I have had time to really play the game with the community. One of the greatest experiences I had had with video games came in early April of 2008, where everyday for about a month I could not wait for school to finish so I could go home and play on the PC Gamer server. That also entailed waiting for sometimes half an hour to get in the server. But the same people played almost every night and it was a tremendous amount of fun. That experience is one that I feel gives me special credibility in reviewing this game. 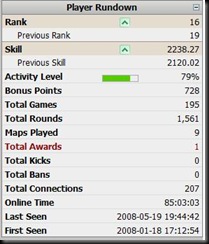 Shawn Elliot, an old editor for Games for Windows Magazine, has often wondered what the point of reviews are. My impression is that they are someone’s opinion to whether or not it is a worthy purchase. In few words: yes. In many words: yes yes yes yes yes. Especially when they are giving it away for ten dollars every so often, and when it is not on sale, it is only twenty bucks. My advise is : if your computer can run it, you like shooters and you have the internet, buy this game.

I wrote a paper not too long ago that postulated the question: “what is more important, form or content?”. This applies to everything, including video games. So I will start out with form.

Graphics. Team Fortress 2 is built from the source engine, which was made for Half Life 2. The team over at Valve has made one spectacular engine. The graphics are cell shaded but everyone moves like real people. In each map, every different section has a different art design so the player never gets lost. In two sided maps, like 2fort or Well, each base is uniquely colored, either red or blue. Most importantly, the nature of graphics help us suspend reality. We forget to question why the soldier has flames on his feet after he jumps using a bazooka. Or how the medic can shoot health out of a gun. The game also runs extremely well, coasting at about 60FPS on 1680x1050. 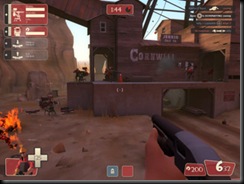 Sound. Sound plays a very crucial role in this game. Because Team Fortress is so stylized, the combat is such that it often takes 10 seconds of constant shooting to kill someone. So, the element of surprise is not needed and quality headphones are not needed. However, Valve put a lot of time into the audio for this game and it shows. The audio helps tell us what is going on just around the corner. The player’s character also shout taunts after kills and these taunts help a lot with immersion into the game. 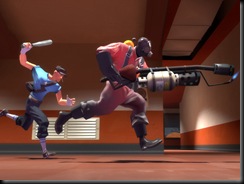 Each class has a distinctive look

Now, for the real fun part of the game, the content. The game shipped with six maps but now has eighteen maps that span across five game types, Control Point, Capture the Flag, Territory Control, Payload and Arena. Each game type is so different it is like changing games almost. Almost every map is brilliant. Valve, as numbers indicate, has released a lot of content over the past year. The new maps outshine the older Hydro and Granary. I had forgot Granary so completely that I had to look it up online. The game type Payload and arena were not originally not shipped with the game. Yet Payload is my favorite game type. It involves pushing a cart, filled with explosives to a checkpoint and the round usually ends with a large explosion.

The game also features nine classes. Three offensive classes: Scout, Soldier and Pyro. Three defensive classes: Demoman, Heavy and Engineer. Lastly, three support classes, Medic, Sniper and Spy. Each class is very different in almost every way, including height, speed, apparel, voice acting, health and weapons. Changing classes is like changing games. The type of play style difference between engineer and soldier is immense. The medic plays nothing like the spy and the scout is a complete opposite of a heavy. Valve has succeeded in differentiating each class enough that the game seems to change when you change. 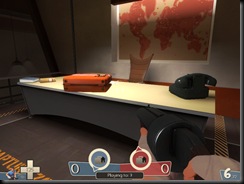 This is clearly the Red base…….

Team Fortress 2 does have flaws though, I suppose. If you are looking for a story, this is not the place for you. This also is not the place for people looking for realism. Feet on fire and invisible people do not exactly scream modern warfare. The learning curve here is fairly steep as well. It takes a while for a new player to learn who does what and how well. Despite those small flaws, Team Fortress 2 is my favorite shooter of 2007 and 2008. Call of Duty 4 was very good, but does not seem to capture the magic of Team Fortress 2’s game play or community.

Ed Note: This is only for the PC version of the Game. I have and will not play the xbox version. It only supports a maximum of eight players a side adding up to a total of sixteen. This is not enough, in my mind, to make a good team, therefore ruining the team experience.